GSHP in a suburban setting - a case study

In the following scenario an early adopter installs a Ground Source Heat Pump (GSHP) and initially enjoys uncontended use of the sensible heat contained within a hemispherical volume of sub-soil beneath her - and her neighbours' properties. Later, under a policy of mass adoption of GSHP technology, all the surrounding properties are competing for the same heat and the effective source volume is bounded by the area of property, straight down. 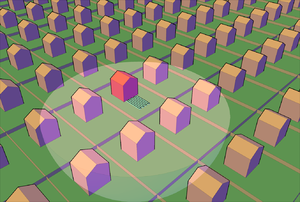 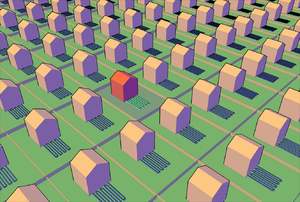 This latter case can be mathematically modelled as "Transient Heat Conduction in a Semi-infinite Solid". The housing estate is an infinite surface plane, held at the heat extraction temperature T0°C. The ground extends to an infinite distance in all horizontal directions - and downward (hence semi-infinite solid) and is initially at a uniform temperature Ti°C. Since Ti > T0 heat flows from below ground towards the surface where it is collected by the slinky coils and used to heat the house. The mathematical solution (proof not given here) provides equations for the temperature distribution within the sub-soil, as a function of time and depth and the heat flux, that is the quantity of heat that can be extracted at the surface, a function of time alone

The governing equation is:

where T(x,τ) is the sub-soil temperature at depth x metres and after τ days

erf() is the Gauss error function; conveniently, this function is supported for MS Excel spreadsheets as =ERF()

and for this case study the following values were used:

Additionally, the house is on a 12 metre x 18 metre plot and has a heating requirement of 12,000 kW-h per year equivalent to the OFGEM Typical Domestic Consumption Value (TDCV) for gas, for a medium size household (the GSHP is providing space heating and domestic hot water in place of a gas boiler). 12,000 kW-h equates to a year-round average demand of 1,370 W; the demand model was further refined to reflect varying seasonal requirements using a 'degree-days' method, explained elsewhere. Also it was assumed that for every 3.5 kW of heat delivered to the house, 2.5 kW came from the ground and 1 kW from the electrical energy to drive the heat pump (coefficient of performance / COP = 3.5). The case study covers an eight month 'heating season' from October to May. It is a fairly trivial exercise to create a spreadsheet from scratch using the information given above and then one can compare, for example, the times for the subsoil to cool to 7°C at depths 0.5m, 1m, 2m: 7 days, 28 days and 112 days respectively. At 5m depth the temperature never goes below 8°C and at 10m the sub-soil barely drops ½°C. Here is a graph of the results: 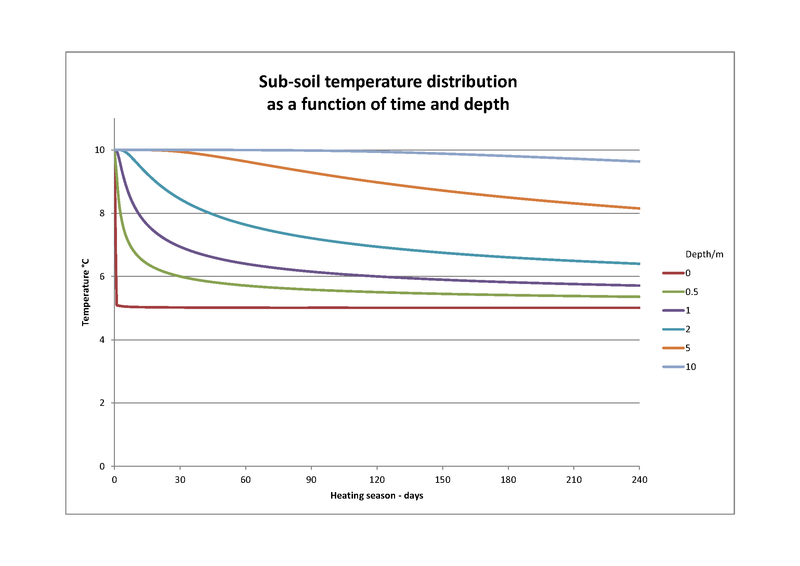 Heat flux at the surface

A second equation gives the heat flux, that is, the rate of heat that can be extracted from the ground directly below the householder's property boundary:

where Qsurface is heat flux in Watts (W)

Again, creating a spreadsheet is a trivial exercise and the results are illustrated below: 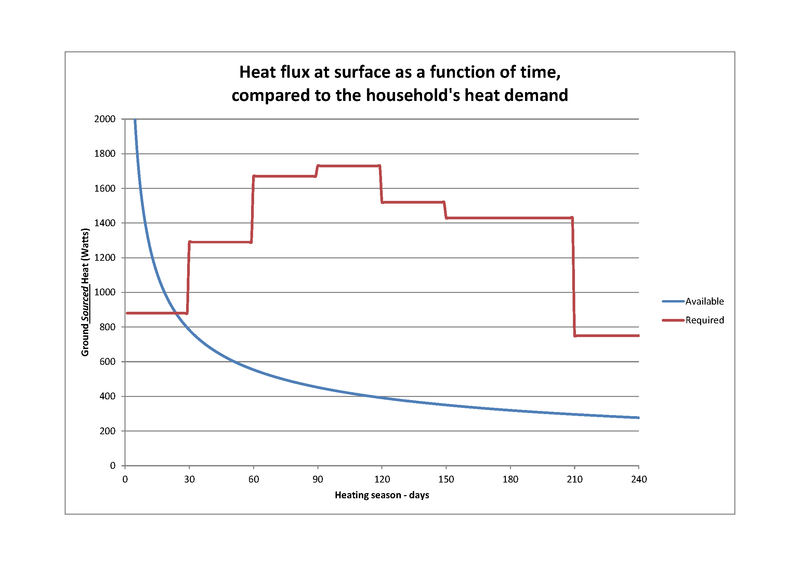 Mass deployment of Ground Source Heat Pumps in a suburban setting would result in inadequate space heating and domestic hot water for the households in the scheme. The area available per property is simply too small

The findings can be understood in qualitative terms. Initially, at the start of the heating season demand is low and ground heat is close to the surface, easy to extract. But as time progresses the shallower sub-soil cools close to the extraction temperature and heat must then be obtained from deeper into the ground making it harder to extract - just at the same time demand is reaching its winter peak

In urban settings the problem would be exacerbated due to the higher property density. In rural environments and for properties with extensive grounds, GSHP may be an appropriate solution

The working assumption is that solar gain during summer would be sufficient to recharge the ground with heat ready for the next heating season. This is by no means certain and further study must be made to check if there would be a multi year cooling effect from using GSHP technology