Don't worry - you're in good company. Many politicians and journalists - who should know better - also get confused. 'Energy' and 'electricity' in particular get used interchangeably, almost as synonyms - but they're not. So you get gushing comments like:

"On 14 May, Britain generated a quarter of its energy from the sun - the largest proportion yet."

All electricity is energy, but not all energy is electricity. In fact most of the energy (around three-quarters) used in the UK isn't electricity - rather it comes from fossil fuels. Fuels are a source of energy rather than energy as such and are characterised by having a physical existence (solid, liquid or gas) and portability - which explains their particular usefulness in transportation.

So how much energy does the UK produce and consume - and how much of it comes from renewable sources? According to the latest (2020) official figures published by the Department for Business, Energy & Industrial Strategy we used 170 million tonnes of oil equivalent 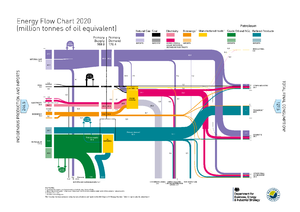 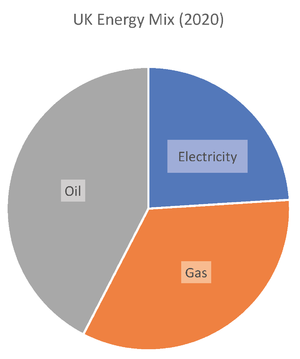 So we can see electricity is the smallest of three broad categories of energy production/supply - about a quarter. And renewables contribute around about a quarter of electricity generation. Excluding electricity generation, there are a few examples where renewable fuels are used to supplement fossil fuels. Bio-ethanol was added as a 5% admixture to unleaded petrol (recently increased to 10%). Small amounts of bio-methane is added to (fossil) natural gas under the 'gas-to-grid' scheme. Overall, though, renewables contribute only around 10% of total UK energy.

Given that wind turbine and solar PV technologies produce electricity, the burden falls onto finding ways to do things which previously needed fuels and replacing by electricity. Equally challenging is transforming the 'pie' from one quarter electric to mostly electric; the implication being we need to quadruple electricity generation

Presently our National (electricity) Grid compensates for renewables' intermittency to balance supply and demand by managing output from Combined Cycle Gas Turbine power stations (the work-horses of UK electricity generation) and the relatively few still operating coal-fired power stations. When these all close in 2025 grid stabilisation will become harder and power shortages are a real possibility.

Without fossil-fuelled power generation to prop-up renewables, some other measure is needed to shave the peaks and fill the troughs of supply - storage is one possibility, but it is incredibly difficult and costly even at renewables' present day 25% contribution. Could you devise a storage strategy to balance variations in wind and solar PV to within +/- 1000 MW of the average 6700 MW (actual 2019 figures)?
Have a go!