FLUKE has carried out original statistical analysis using the extensive HadCET Data Set comprising daily temperature in central England for the past 247 years (around 90,200 data points). The approach taken was to average every day over the entire time period i.e.

and compare every day against the same date's average over the entire 247 years. The objective was to filter out 'noise' due the large seasonal variation in temperature in any year. Even so, the chart shows considerable daily variation - on any given day, the temperature might be easily be +/- 5°C from the mean for the time of year and rarely +/-10°C. As a test of the null hypothesis i.e. has there has been NO warming over 247 years? a best fit trendline was added. Although the R² value is small, there is indeed a positive gradient of 1.13x10-5 evidence of a warming trend - which multiplied by the x-axis range (90,200 days) equates to a temperature rise of around 1°C over the time period - or about 0.4°C per century) 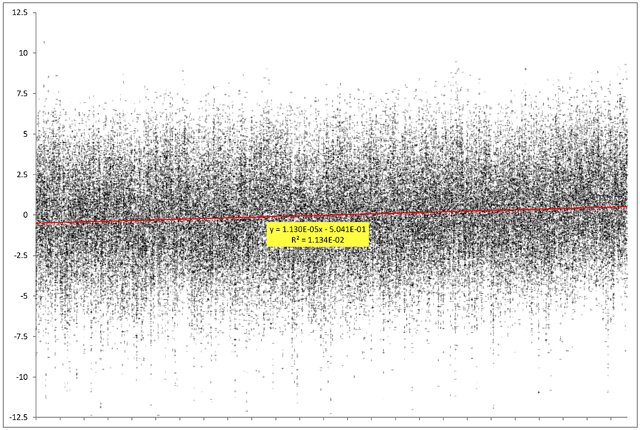 Since in preparing the graphic, the data had already been processed into deviations from the 247-year mean, a second stage of analysis using CUSUM seemed appropriate