The Mendeleev Program is a proposal to provide 5GW (five gigawatts) of new low carbon electricity generation and 10GW (ten gigawatts) of low carbon heat, suitable for household space heating and domestic hot water for 17 million people - about one-quarter of the UK population. The energy would be produced by a fleet of ships, permanently moored at port cities around the UK. The ships will be standardised to just two designs, fitted either with ONE (Ship-based single-SMR) or TWO (Ship-based twin-SMR) nuclear Small Modular Reactors (SMR), based on established pressurised water reactor (PWR) technology. The high-temperature SMR coolant will raise high pressure steam [40 bar (abs) / 290 deg. C] and electricity will be generated using non-condensing steam turbines. Doing so reduces the electrical efficiency but increases thermal efficiency: the basic principle of combined heat and power (CHP). The turbine exhaust is low pressure steam [1.1 bar (abs) / 102 deg. C] and used to heat a primary hot water circuit [90 deg. C flow; 60 deg. C return] which is the medium for distributing heat to the city. The shore-based infrastructure will consist of an electrical sub-station to distribute the generated electricity out to the city and beyond and a thermal distribution centre to pump and circulate hot water to- and from- a brand new (or at least greatly expanded) city-wide district heating network

Benefits of a ship-based SMR design

The cost of a SMR used in this study was based on an interview by Mr Paul Stein of Rolls-Royce to the Telegraph newspaper (19 March 2016), where he said "the company could have the first [220MWe] SMR generating power in 10 years for £1.25bn". Comparing the SMR to the new Hinkley Point nuclear power station under construction in Somerset, Mr Stein went on to say "I’d be disappointed if using SMRs we couldn’t generate power at least a fifth cheaper" Given that the strike price for Hinkley is £92.50 per MW-h a figure of £75 per MW-h seems a reasonable valuation for the electricity produced from SMRs.

Regarding heat production, installing a city-wide district heating network would be disruptive and consumers would have to convert from their existing heating systems. Therefore the heat would be offered at a TWO-THIRDS DISCOUNT to cheapest competitive fuel (gas) so 1p/kW-h or £10 per MW-h.

Rolling out a new district heating network across a whole city amounts to laying a distribution network of index runs and branches for two well-insulated hot water pipes (flow and return) to the threshold of every property. To get a capital cost estimate, the total length of all roads and streets in each of the 22 candidate cities was determined and the unit rate of £1 million per kilometre applied. This cost is taken from a report in Recycling Waste World 06 December 2013 covering the South East London Combined Heat and Power (SELCHP) project. As an added bonus/incentive at the same time the hot water pipework is laid, fibre optic cable could be provided delivering ultra-fast broadband to all the properties in the scheme, for a very small additional marginal cost

Ballpark estimate capital cost for all 22 projects is £84 billion, split roughly 50:50 between the SMRs and the DH networks; revenue from the sale of electricity and heat £4 billion, a simple payback period, before operating expenses of 21 years. (The major operating cost of a conventional fossil-fuel power station - the fuel itself - is for a nuclear reactor "embedded" in the capital cost)

A 'candidate' site is very simply defined as a port city or conurbation with an urban population of about 130,000 or more. Ports - obviously - being a prerequisite for bringing in a ship. The minimum population is necessary to keep the capital cost per household for the ship within reason and an adequate population density aids the economics of the district heating network 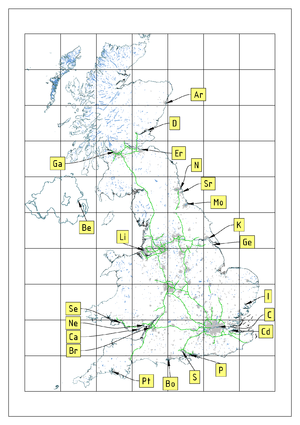 Following the tradition of giving individual projects cheesy nicknames - in this case elements of the periodic table, it seemed appropriate to name the overall program for its creator, Dmitri Mendeleev ☺