This case study – original work © Fluke – illustrates the scale of operation needed to provide 1.1 GW (one gigawatt) of electricity on a twelve hours on, twelve hours off cycle. This could be used for peak shaving renewable energy or balancing periods of low and high demand.

The base case, without storage, is a 2.0 GW (thermal) output nuclear power station producing electricity via steam turbines at a thermodynamic efficiency of one-third (33⅓ %) 24-hours per day, so 0.67 GW (electrical) continuously.

The study case is an identical power station, located adjacent to a large underground void.

It is feasible to use mechanical energy to compress air and place it into the void, which acts as a pressure vessel. The compression takes place in four stages, each compressor being directly driven from the output shaft of a steam turbine. SIX such arrangements in parallel are required to consume the entire thermal steam output and under this operation no electricity is generated.

At other times air is drawn from the store, heated (and reheated) using 43% of the steam output of the nuclear power station as it expands through four stages of air turbine driving generators. The balance of steam 57% is used to generate more electricity from three steam turbines. Again SIX of these lines are required to consume the entire thermal output and the power generation per line is 183 MW so 1.1 GW gross

So comparing cases, without storage the nuclear power station delivers 16 GW-h electricity continuously over a 24-hour period while the CCNG-CAES generates 13.2 GW-h for 12 hours and nothing for the other 12. The analogy is inexact but the system is in effect a 13.2 GW-h battery with a round trip efficiency of 82.5%

It is also informative to compare this with SSE’s Coire Glas pumped hydroelectric scheme – 30 GW-h storage with 1.5 GW input/output https://www.sserenewables.com/hydro/coire-glas/

To put this requirement in context, salt mining / extraction creates large volumes of void space and salt mines are favoured locations for compressed air storage. The void space at Veolia’s Minosus facility at Middlewich, Cheshire which is used for hazardous waste storage was an estimated 23 million cubic metres in 2006. Ongoing salt production of 1 million tonnes per year produces new void of about ½ million m³ a year.

Fresh air intake (design conditions 20°C, 1 bar) is compressed in four stages with intermediate and final pressures respectively 2.8 bar, 7.8 bar, 22 bar and 60 bar (6 MPa); the pressure ratio at each stage is ~2.8. Intercooling to 35°C is provided between stages and after the final stage prior to storage. Compression is carried out with an assumed isentropic efficiency of 0.85 and the procedure can conveniently be calculated by spreadsheet, using an equation of state for air that provides temperature as a function of (pressure, enthalpy) or (pressure, entropy); enthalpy function of (temperature, pressure) or (pressure, entropy) and entropy as a function of (temperature, pressure). For this study the equation of state used was the NIST Refprop 9.0 program. The following table illustrates the basic equations used to construct the spreadsheet

Compressed air from storage (design conditions 35°C, 60 bar / 6 MPa) is heated to 300°C and expanded in four stages with intermediate and final pressures in the reverse order to the compression stage: 22 bar, 7.8 bar, 2.8 bar and 1 bar; the pressure ratio at each stage as before is ~2.8. Reheating to 300°C is employed for the second and third expansions but not the final one. Expansion is carried out with the same assumed isentropic efficiency as for compression - 0.85 and a similar spreadsheet calculation can be constructed as shown in the following table illustrating the basic equations used

The size and scale of one compressor unit can be gauged from the access ladders in the following illustration: 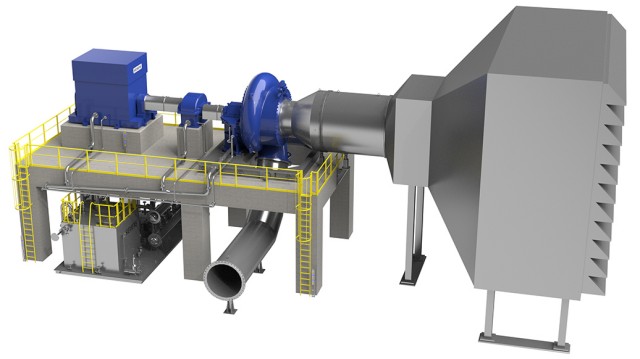 Is it worth it?

The question rather misses the point of the case study - which is to illustrate the sheer scale of the balance of plant required to provide 1.1 GW of discretionary power. Certainly the Coire Glas scheme has twice the storage and a greater output - but it doesn't produce any power in its own right, unlike CCNG-CAES. Many candidate sites for pumped hydroelectric energy storage are in the Scottish highlands and remote from electricity generation and demand; electricity transmission losses will not be trivial. And who knows what the future relationship between Scotland and the rest of the UK might be?

The feasibility of CCNG-CAES is subject both to the availability of suitable void from extractive industries and acceptable location of new nuclear generation build. It has, at least the potential of bringing flexible output generation capacity at scale in closer proximity to a high energy demand heavy industrial conurbation area.