For larger cities, with populations greater than ~400,000 a design with twin SMRs offers better turn-down of heat during periods of lower heat demand i.e. late spring through summer into early Autumn.

One SMR is configured exactly as it would for the smaller single-SMR ship design, that is it operates year round in CHP mode producing electricity via a non-condensing turbine and using the low pressure exhaust steam to heat a district-heating water circuit. Any surplus heat in the form of uncondensed steam is removed by the on-board supplementary condensers and the cooling circuit for these is cooled, in turn, by water drawn from the estuary.

The second SMR by contrast is provided with a second steam turbine of the condensing type which allows greater steam expansion within the turbine producing higher efficiency and electricity output. It is used at times when the first SMR can provide the entire heat demand on its own. The condensing temperature, a nominal 45°C, is below the district-heating water circuit temperature, so the exhaust steam bypasses that heat exchanger and passes directly to the on-board supplementary condensers before being returned as condensate to the hot-well, as before. Under winter conditions the system reverts to the same operating conditions as the first SMR using the non-condensing turbine. The practical implication of this is in 'summer' mode the turbine can produce an extra 30 MWe utilising heat energy that would otherwise be dumped. 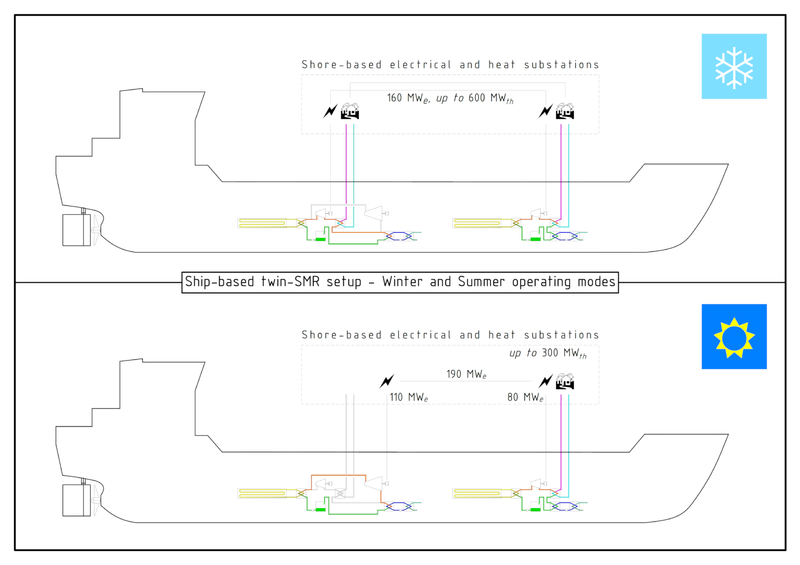