Bad vibrations? A brief explanation of the heat trapping properties of CO2

Basic mechanism for the absorption of radiation

When radiation (visible light, infra red, ultra violet …) impacts an atom or a molecule, if the frequency of that radiation matches the natural resonant frequency of the molecule energy it is momentarily absorbed, 'exciting' the molecule into a higher energy state. After a short time the same amount of energy is re-radiated and the molecule returns to its normal or 'ground' state. Although the radiation is only 'borrowed' this capture/release is nevertheless an absorption mechanism, because the re-radiation occurs in a random direction so in the simplified 1-dimensional case there would be a 50% probability the radiation were sent back in the direction it came from. It can be readily understood that for a sufficiently deep and concentrated layer of molecules, this scattering and attenuation could amount to absorption

The three main component gases of earth's atmosphere (diatomic Nitrogen and Oxygen, monatomic Argon) are transparent to heat (infrared) radiation. Or, in terms of the explanation in the previous paragraph, these molecules' bonds are too rigid, too 'highly strung' to respond or resonate to frequencies in the infra-red

Molecules with three (or more) atoms are different. Additional bonds provide more ways to twist and bend the molecule and in the same way it takes much less energy to bend a ruler than to stretch it, these vibrational modes match specific infra red wavelengths / frequencies. All the 'greenhouse gases' (Carbon dioxide CO2, Water vapour H2O, Methane CH4, CFCs etc.) are molecules with three or more atoms

Relevance to the 'Greenhouse' Effect

The analogy is drawn between a warmer-than-expected Earth and a greenhouse which allows tropical plants to grow in a temperate climate. The mechanisms for both are:

The CO2 molecule can stretch asymmetrically, stretch symmetrically and bend parallel or perpendicular to the double bond O=C=O. The wave numbers for these four modes are 2349 cm-1, 1340 cm-1, 667 cm-1 and 667 cm-1

The second, symmetric stretching mode is IR inactive (does not absorb heat radiation) because:

Nevertheless the salient features of the interaction between infra-red radiation and CO2 are the absorption peaks (or transmittance 'notches'): 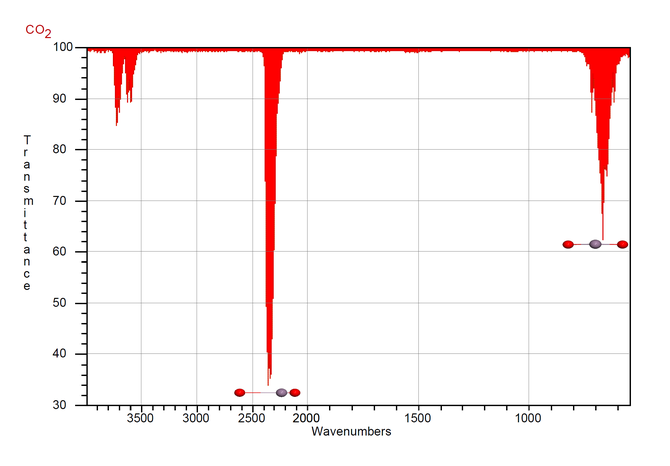 It is also instructive to see the effect of increasing CO2 levels on transmittance. While increasingly high concentrations will, eventually completely block infra red radiation at the relevant wave number transmittance cannot drop below zero. At other wave numbers / lengths frequencies the atmosphere remains transparent to IR. The numerical value inset in the animation below refers to ppm CO2

FLUKE is not counselling complacency about rises in CO2 levels in the atmosphere, merely observing: